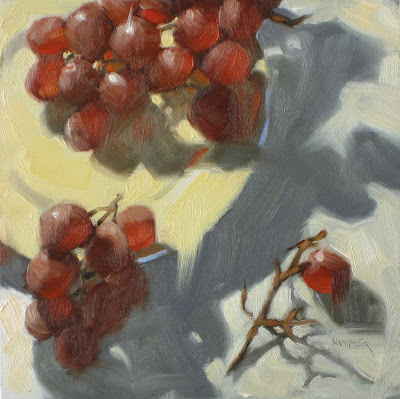 I am enjoying painting these glowing grapes.    I ate some as I was setting up and thought why  not include the stem!
Sold 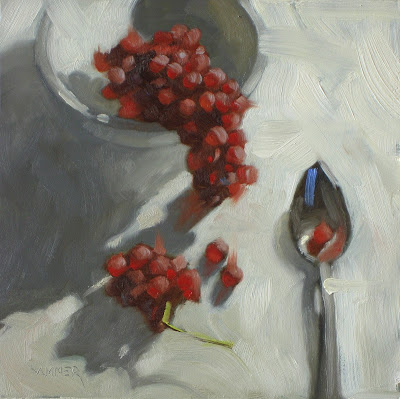 These itty bitty grapes are actually called Champagne grapes but that did not sound as fun as itty bitty.  I love the way the light glows through the tiny little orbs.  They taste very sweet! 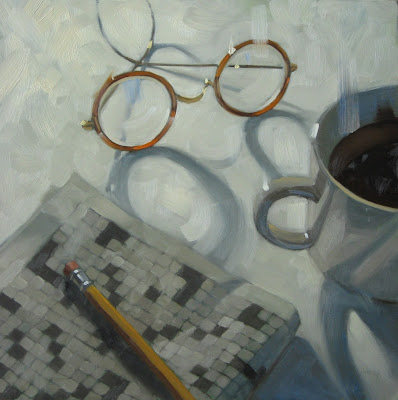 You will notice that this is a larger piece, 18" square and it is painted on a cradled wood panel.   This is part of my series of larger works that are to go to a gallery.   Haven't selected the gallery yet but I am having fun working on the pieces! 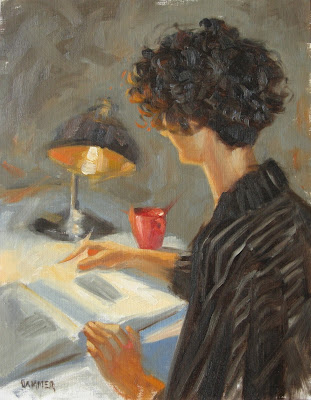 Before this new hairdo Hannah had dreadlocks.  We loved her old hair and we love her new hair...  We just like her any way her hair looks. 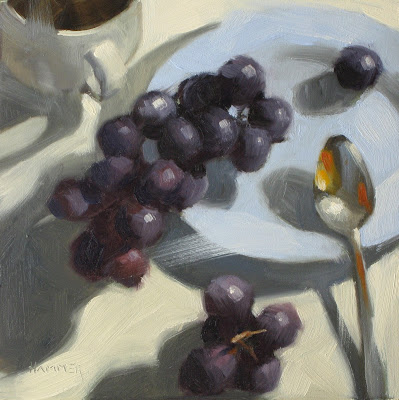 Well it is back to my grape series for the moment.   I am trying really hard not to get nitpickitus.   It is not easy.   Besides being nice to look at these grapes are delicious!   What you see has now vanished!
Sold
My blog: http://claudiahammer.blogspot.com
My website: http://claudiahammer.com
My email: iclaudiahammer@twc.com
My DPW gallery: http://www.dailypaintworks.com/Artists/chammer-209
Posted by Claudia Hammer a Painting a day at 3:27:00 PM 3 comments 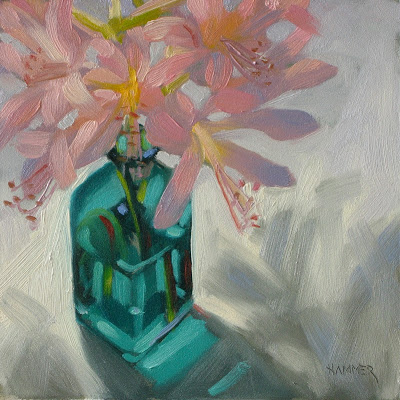 These Naked Ladies have been parading around in the yard and even though I have a privacy fence the neighbors are whispering.... "Those artist!  They always have naked ladies around.   They say they use them as models!"   And today I did! 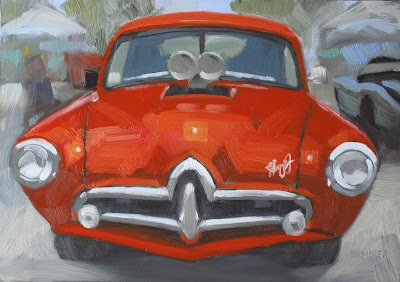 Yes, it is that time of year when when the "Street Rod National Show" was here in Louisville this past weekend with over 11,000 cars to dazzle the imagination.   I love seeing these cars drive around town.

This 1951 Henry J was here from Alabama and I could not resist it.   I am in love with the grill!  And as you can see the engine is more than a 4 cylinder.

The Henry J was built by the American company Kaiser-Frazer Corp. and named after the Chairman, Henry J Kaiser.  The first year they were built, 1950 (that is the year I was built too!) they had 6 cylinders and they began 4-cylinder models in 1951. The company quit producing in 1954.   Read about the car's brief history and interesting facts here. 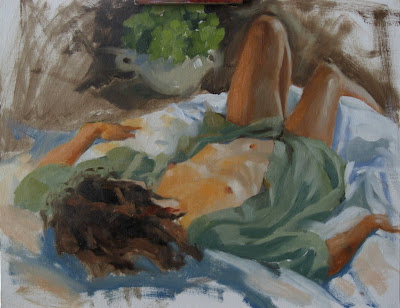 With this painting we had her pose twice for a total of 6 hours which included breaks and setting it up.  Everything I have done of late has been alla prima, (painting wet into wet paint or all in one sitting) so it was a challenge to paint on it the second time on top of dry paint!   We had a warm yellowish bulb above her and north light coming in through the window at her feet which made for some interesting contrasting light.   I loved the foreshortening, one of my favorite things to do because of the challenge, I think. 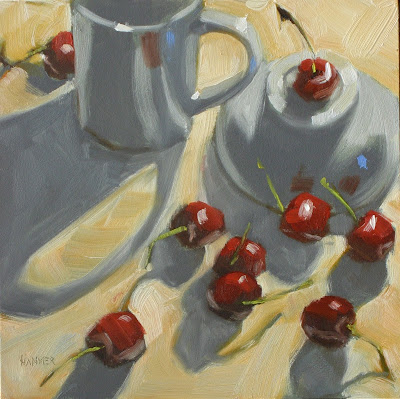 After all that excitement about grapes I decided to paint cherries today!  I am so fickle.   But the cherries were excited to be out and about!   When the bravest one jumped on the podium the others demanded he give a speech except for one shy one that hid behind the cup. 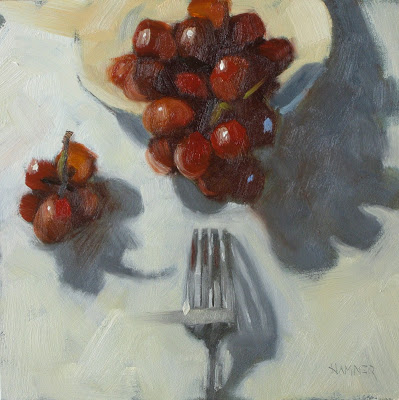 Well I finally got excited about something and it is grapes!   Who knew grapes would be so exciting to me.  Certainly not I!!  While I love the grapes... I find the fork is my favorite part.    Maybe I am really excited about forks!    Now I am confused and amused!