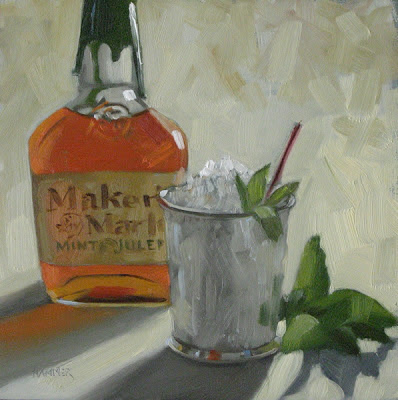 Sold
A Mint Julep is the official Derby drink although you will find few who drink it the rest of the year but you will find it everywhere on Derby Day here in Louisville KY home of the Kentucky Derby.
Easy Recipe:
Pack a glass with crushed ice and put in a sprig of mint and a short straw, when frost forms pour in Maker's Mark Mint Julep bourbon. Voila!
Recipe From scratch:
1 sterling silver julep cup (or official Derby tall glass)
1 oz. simple syrup ( made from 1 part water, 1 part granulated sugar, heat to dissolve sugar)
5-7 mint leaves
3 ounces Kentucky bourbon
3 ounces water
Into a large mixing glass pour simple syrup, add mint, and muddle well.  Add bourbon and water.  Fill with crushed ice or small ice cubes and shake.  Garnish with a large sprig of fresh mint and add a long straw.
History of Mint Juleps - Mint juleps were probably first served in the early to mid 1700s in Maryland, Virginia and North Carolina. "Mint julep" first appeared in print in 1803, described as a "dram of spirituous liquor that has mint in it, taken by Virginians in the morning." The French word "julep" is derived from the Persian "gulab," a sweet concoction that may have been a vehicle for medicine.
The first mint juleps were made with rum, rye whiskey and other available spirits. Kentucky bourbon whiskey wasn't widely distributed until later in the 19th century.   The tradition of sipping mint juleps migrated westward to Kentucky, and soon became associated with horse racing. In 1816, the KentuckyGazette mentioned mint julep cups being awarded as prizes at horse races in the Commonwealth. We do not know when bourbon was first used in juleps, but by the early 1800s, many Kentucky farmers owned stills, which they used to make corn whiskey or what is now called bourbon. Later, bourbon became the preferred spirit in mint juleps everywhere.