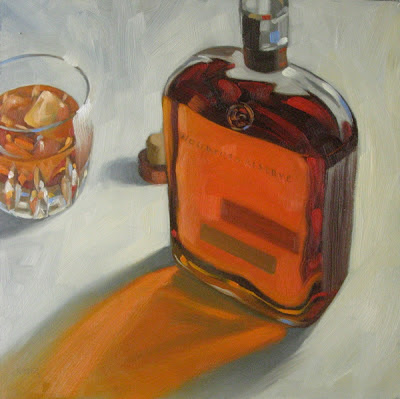 Sold
Chris Morris is the seventh Master Distiller in Brown-Forman Corporation's 140 year histor and is responsible for maintaining the award winning tast of Wordford Reserve.  Read about his profile here.  Head Chef Quita Michel was nominated four years in a row for a James Beard Foundation Award in 2011 for Best Chef Southeast.
My blog: http://claudiahammer.blogspot.com
My website: http://claudiahammer.com
My email: iclaudiahammer@insightbb.com
My DPW gallery: http://www.dailypaintworks.com/Artists/chammer-209
Posted by Claudia Hammer a Painting a day at 8:07:00 PM 2 comments
Labels: bourbon, cocktails, drinks, whiskey, woodford reserve 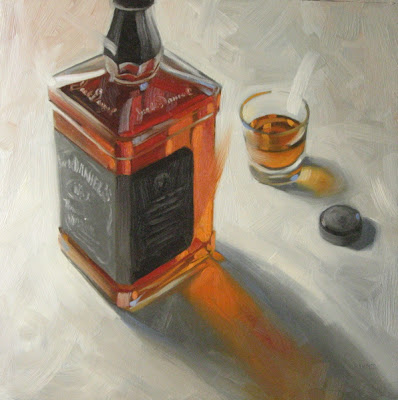 Sold
Jack Daniel was a real person and was a legend from birth to death and in between he created Jack Daniel's Tennessee Whiskey.  No one really knows exactly when Jack was born.  A town fire destroyed the courthouse records and conflicting dates on Mr. Jack's and his mother's headstones have left his date of birth in question.  It is customary to celebrate Mr. Jack's birthday in September - so he gets a whole month.   But for a man as unique as Jack, one day just wouldn't seem proper anyway.
As the story goes, Mr Jack arrived at work early one morning and tried to open the safe in his office.   Thing is, he couldn't recall the combination.   In his frustration he gave that safe a good solid kick.  The blow broke his toe and infection set in, leading to the blood poisoning that would take his life in 1911.  Because he never married or had children, he deeded the Distillery to his hard-working nephew, Lem Motlow.   Some people say Jack not only left his tennessee whiskey behind, he left us all a valuable lesson as well:  Don't go to work early.
He is buried in the Lynchburg, KY, town cemetery and you can find his grave by looking for the two chairs next to his headstone.   It's said that the chairs were placed there to comfort the many local ladies who mourned his passing.
Many stories have been passed down about the significance of Old No. 7.  Some say that Jack had 7 girlfriends, or that the way he wrote his "J" looked like a 7.   Some say he chose the number 7 simply because it's lucky.  One story goes that the recipe for Jack Daniels was Mr. Jack's 7th recipe or 7th trial batch.  One story says that is was the railroad shipping number on a barrel, we'll never know for sure.
My blog: http://claudiahammer.blogspot.com
My website: http://claudiahammer.com
My email: iclaudiahammer@insightbb.com
My DPW gallery: http://www.dailypaintworks.com/Artists/chammer-209
Posted by Claudia Hammer a Painting a day at 8:41:00 PM 1 comments
Labels: bourbon, cocktails, drinks, jack daniel, jack daniel's, SOLD, whiskey 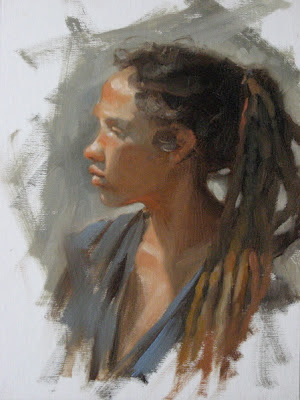 Click here to purchase. $125
She will graduate soon and will not be available for the future.  She is the best!
My blog: http://claudiahammer.blogspot.com
My website: http://claudiahammer.com
My email: iclaudiahammer@insightbb.com
My DPW gallery: http://www.dailypaintworks.com/Artists/chammer-209
Posted by Claudia Hammer a Painting a day at 10:08:00 PM 0 comments
Labels: female, figurative, portrait 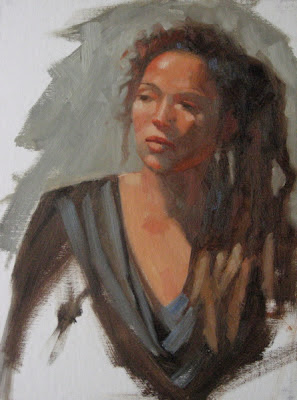 Sold
Painted this last Friday, just now had time to post.  I am taking some time to work on larger pieces and work on some commissions.  Will post when I get a chance.   Thank you all for following my blog.
My blog: http://claudiahammer.blogspot.com
My website: http://claudiahammer.com
My email: iclaudiahammer@insightbb.com
My DPW gallery: http://www.dailypaintworks.com/Artists/chammer-209
Posted by Claudia Hammer a Painting a day at 6:52:00 PM 2 comments
Labels: female, liz, portrait 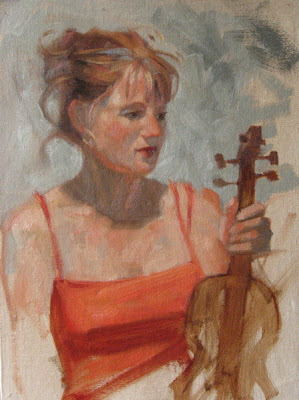 Click here to purchase.  $125
Painted this Friday and just now getting around to posting it.
My blog: http://claudiahammer.blogspot.com
My website: http://claudiahammer.com
My email: iclaudiahammer@insightbb.com
My DPW gallery: http://www.dailypaintworks.com/Artists/chammer-209
Posted by Claudia Hammer a Painting a day at 11:25:00 PM 3 comments
Labels: carolyn, female, portrait, violin 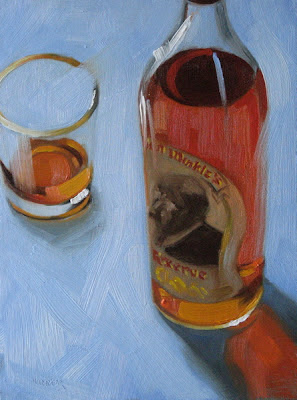 Someone told me once that there is over 100 bourbons that are made today.   I simply cannot paint them all and there were quite a few on my short list that I did not even get to but I saved the best for last.

Pappy Van Winkle 20 year has received a rating of 99 by the Wine Enthusiast Magazine.

The Old Rip Van Winkle Distillery has a four generation history.  The Van Winkle family's involvement in the bourbon industry began in the late 1800s with Julian P. "Pappy" Van Winkle, Sr.  He was a traveling salesman for the W.L.Weller and Sons wholesale house in Louisville, Ky traveling around the state by horse and buggy.  Pappy and a friend, Alex Farnsley, eventually bought the wholesale house and also purchased the A. Ph. Stitzel Distillery, which made bourbon for Weller.  The merged the two companies and became the Stizel-Weller Distillery.  Their prominent brands were W.L.Weller, Old Fitzgerald, Rebel Yell and Cabin Still.
In May of 1935 at the age of 61, Pappy opened the newly completed Stitzel-Weller Distillery in South Louisville.  He had a heavy influence on the operations there until his death at the age of 91.  His son, Julian, Jr. took over operations until he was forced by stockholders to sell the distillery in 1972.  The rights to all of their brands were either sold with the distillery or to other distilleries.
After selling the distillery, Julian Jr. resurrected a pre-prohibition label, the only one to which the Van Winkles kept the rights, called Old Rip Van Winkle.  He used whiskeys stocks from the old distillery to supply his brand.  Julian Junior's son, Julian III took over in 1981 when Julian Jr. passed away.  Julian III has continued with the Van Winkle tradition of producing the highest quality wheated bourbon available.  His son, Preston joined the company in 2001.
Recently, the Van Winkles entered into a joint venture with the Buffalo Trace Distillery in Frankfort, Ky.   All of the Van Winkle's whiskey production now takes place at Buffalo Trace under the same strict guidelines the family has always followed in order to produce a superior quality product. 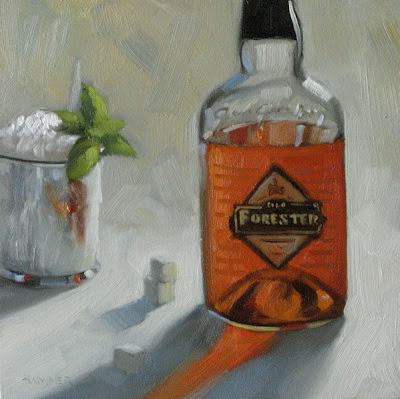 Click here to purchase.  $100
In the 1800's, bourbon whisky was sold in bulk to rectifiers, wholesalers, brokers and retailers.  Barrels were branded with a distillery or "brand"name.  Package stores/druggist bottled their own labels from bulk supplies.   Unscrupulous rectifiers, jobbers and retailers would often tamper with the quality and integrity of the whisky in the barrel.
In 1870, George Garvin Brown, a young pharmaceuticals salesman in Louisille, Kentucky, saw the need for a consistently high-quality whisky that met medicinal standards.   With $5,500 in saved and borrowed money, Brown and his half brother started J.T.S. Brown and Bros.   They sold Old Forester Bourbon Whisky exclusively in sealed glass bottles to assure its quality.   George Garvin Brown ensured the quality of his product with his handwritten guarantee on every bottle.   Unfortunately, the inspiration and origin of the Old Forrester brand name died with George Garvin Brown.   However, it is believed that George Garvin Brown's brand was named after one of Louisville's leading physicians, Dr. William Forrester (and presumably one of his best customers).  you will notice that the originally Old Forester was spelled with two r's.  When Dr Forrester retired, his endorsement would not longer have been valid. The name changed to reflect his change in status. 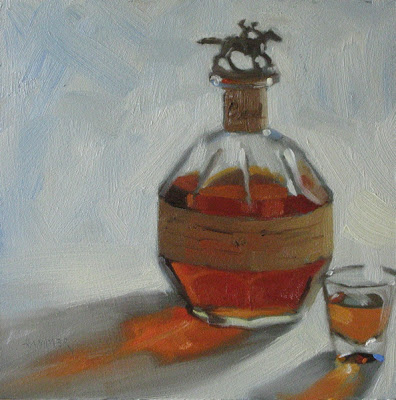 Sold
Blanton's is one of my favorite bourbons.  Colonel Albert B. Blanton first bottled his private reserve bourbon nearly a century ago.  He believed in the "center-cut' or middle sections of Warehouse H were the best for aging his bourbon.   Personally tasting and choosing each barrel, these barrels were reserved and bottled for ambassadors, dignitaries, family and friends becoming the world's first single barrel bourbon.
Blanton's bourbon has made TV appearances in: Outlaw, Entourage, True Blood, Bored to Death, Desperate Housewives, Justified, Big Bang Theory, Southland, NCIS, CSI.  Fox News acclaims Blanton's as one of the World's top 10 coolest liquor bottles.  The tiny horse and jockey on the bottle stoppers are now a recognized trademark of Blanton's.   They have produced a collectors edition set of eight different stoppers, featuring a horse and jockey in different strides and poses.   Each stopper is marked with a single letter that spells Blanton's when the set has been completed.
My blog: http://claudiahammer.blogspot.com
My website: http://claudiahammer.com
My email: iclaudiahammer@insightbb.com
My DPW gallery: http://www.dailypaintworks.com/Artists/chammer-209
Posted by Claudia Hammer a Painting a day at 5:56:00 PM 0 comments
Labels: blantons, bourbon, cocktails, drinks, whiskey 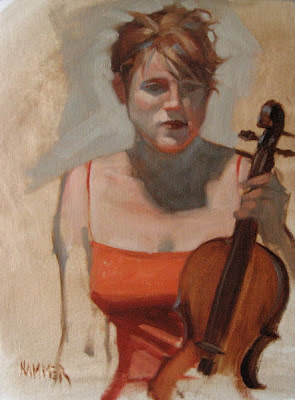 Click here to purchase.  $125
I took liberties today with this one.  She had long hair and I made it short and I wanted to keep it sketchy and I may have put in the violin a little more than I should have.   Oh well, I have another chance next week.
My blog: http://claudiahammer.blogspot.com
My website: http://claudiahammer.com
My email: iclaudiahammer@insightbb.com
My DPW gallery: http://www.dailypaintworks.com/Artists/chammer-209
Posted by Claudia Hammer a Painting a day at 10:04:00 PM 0 comments
Labels: female, figurative, portrait, violin 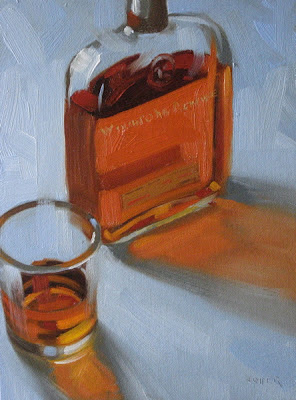 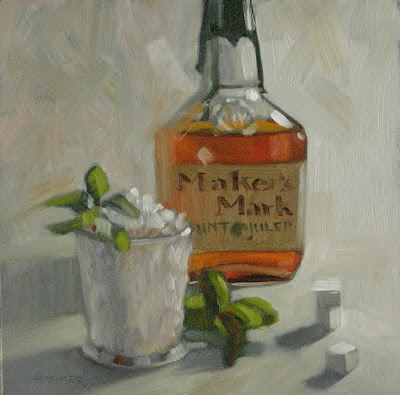 Sold
Maker's Mark makes a great mint Julep that is already to pour.  Here is the recipe on the side of the bottle:
1. Fill each julep cup 1/2 full with shaved ice. Insert mint sprig.
2. Insert straw that has been cut to no more than 1 inch from above the top of the cup so your nose is forced to sniff the mint when sipping the julep.
3. When the frost forms on the glass, pour refrigerated Maker's Mark Mint Julep over the ice and sprinkle powdered sugar on top if desired.
My blog: http://claudiahammer.blogspot.com
My website: http://claudiahammer.com
My email: iclaudiahammer@insightbb.com
My DPW gallery: http://www.dailypaintworks.com/Artists/chammer-209
Posted by Claudia Hammer a Painting a day at 10:52:00 PM 0 comments
Labels: bourbon, cocktails, makers mark, mint julep
Newer Posts Older Posts Home
Subscribe to: Posts (Atom)