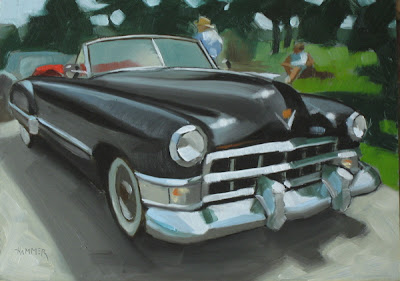 click here to bid.
A big storm blew through here yesterday and my electricity has been out for 18 hours.   But it is back on now!  So here is my painting of a 1949 Cadillac and some interesting fact about 1949.
Average cost of a new house $7450
Average wage per year $2950
A gallon of gas cost 17 Cents
Average cos of a new car $1420
Minimum hourly wage was 70 cents
6.75 richter scale earthquake in Ecuador killed 6000 and destroyed 50 towns
First Polaroid camera sold for $89.95
President Harry S. Truman authorizes $16 million in aid for Palestinian refugees
The Emmy Awards for US television firs presented
First Volkswagen Beetle sold in US
The first car with a Porsche badge is shown in Germany
The first automatic street lights are installed in New Milford Connecticut
45 rpm record introduced
The world's first commercially available computer The Ferranti Mark 1 released.
My blog: http://claudiahammer.blogspot.com
Project Bags: http://iclaudiaprojectbags.blogspot.com
My website: http://claudiahammer.com
My etsy store: http://www.etsy.com/shop/claudiahammer
My email: iclaudiahammer@insightbb.com
Posted by Claudia Hammer a Painting a day at 1:17:00 PM 0 comments