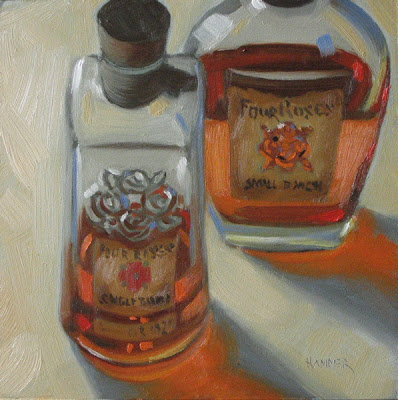 Four Roses Small Batch and Single Barrel, you can click on the highlighted links to read more.  The legend  began when Paul Jones, Jr., the founder of Four Roses Bourbon, became smitten by the beauty of a Southern belle. It is said that he sent a proposal to her, and she replied that if her answer were "Yes," she would wear a corsage of roses on her gown to the upcoming grand ball. Paul Jones waited for her answer excitedly on that night of the grand ball…when she arrived in her beautiful gown, she wore a corsage of four red roses. He later named his Bourbon "Four Roses" as a symbol of his devout passion for the lovely belle, a passion he thereafter transferred to making his beloved Four Roses Bourbon.
My blog: http://claudiahammer.blogspot.com
My website: http://claudiahammer.com
My email: iclaudiahammer@insightbb.com
My DPO gallery: http://www.dailypaintworks.com/Artists/chammer-209
Posted by Claudia Hammer a Painting a day at 5:33:00 PM 0 comments
Labels: bourbon, cocktails, drinks, four roses, kmac
Newer Posts Older Posts Home
Subscribe to: Posts (Atom)