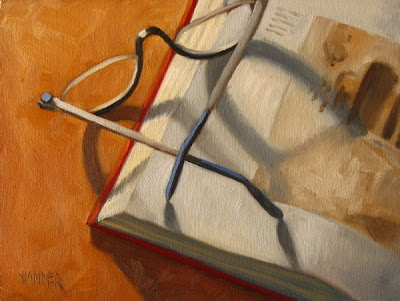 
Well  Duh!   I could use an art book as a prop!  It just occurred to me today!    Then the decision was... which one?!   This book, Gondola Days, is about Isabella Stewart Gardner and the Plazzo Barbaro Circle in Venice.  This magnificent palace on the Grand Canal has been occupied by the Curtis family, expatriates from Boston since 1881 and over the decades has had a stream of notable visitors, including Henry James, Robert Browning, John Singer Sargent, Claude Monet.  I listen to audio books while I paint and last year I listened to "The City of Fallen Angels" by John Berendt, which is a nonfiction thriller set in venice.  It centered around the opera house which burned under mysterious circumstances three days before Berendt's arrival in early 1996.   When I saw there was a book about some of the people he wrote about I just had to have it.    Have I read it?  No, but I have looked at the pictures!
(This is probably more information than you ever wanted to know.)
My blog: http://claudiahammer.blogspot.com
My website: http://claudiahammer.com
My ebay store: http://stores.shop.ebay.com/claudiahammer
My email: iclaudiahammer@insightbb.com
Posted by Claudia Hammer a Painting a day at 8:17:00 PM 3 comments
Labels: books, eye glasses, SOLD, still life
Newer Posts Older Posts Home
Subscribe to: Posts (Atom)