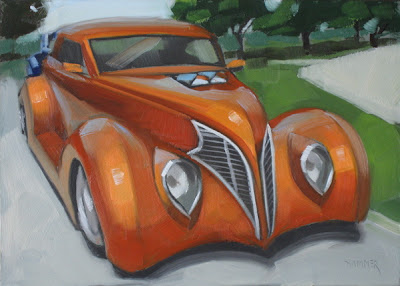 Sold
The friend I always go to this street rod national show with is always looking for the perfect copper color.   I think this car was it. Here are some interesting facts about 1937.
Unemployment was 14.3%
Gasoline was 10¢ a gallon
Hamburger was 12¢ a pound
Amelia Earhart disappeared over the Pacific Ocean.
The Hindenburg burst into flames while attempting to moor at Lakehurst, New Jersey.
The increased number of Polio cases in Chicago causes schools to stay closed.
First total solar eclipse in 800 years to exceed 7 minutes of totality.
Disney released Snow White and the Seven Dwarfs.
"Death on the Nile" by Agatha Christie is published.
"The Hobbit" by JRR Tolkien is published.
"Of Mice and Men" by John Steinbeck is published.
Born this year: Jackie Collins, Anthony Hopkins, Shirley Bassey, Loretta Swit, Warren Beatty, Peter Cook, Bill Cosby, Jane Fonda, Morgan Freeman, Dustin Hoffman, Jack Nicholson, Colin Powell, Vanessa Redgrave
The Golden Gate Bridge in San Francisco is opened.
My blog: http://claudiahammer.blogspot.com
My website: http://claudiahammer.com